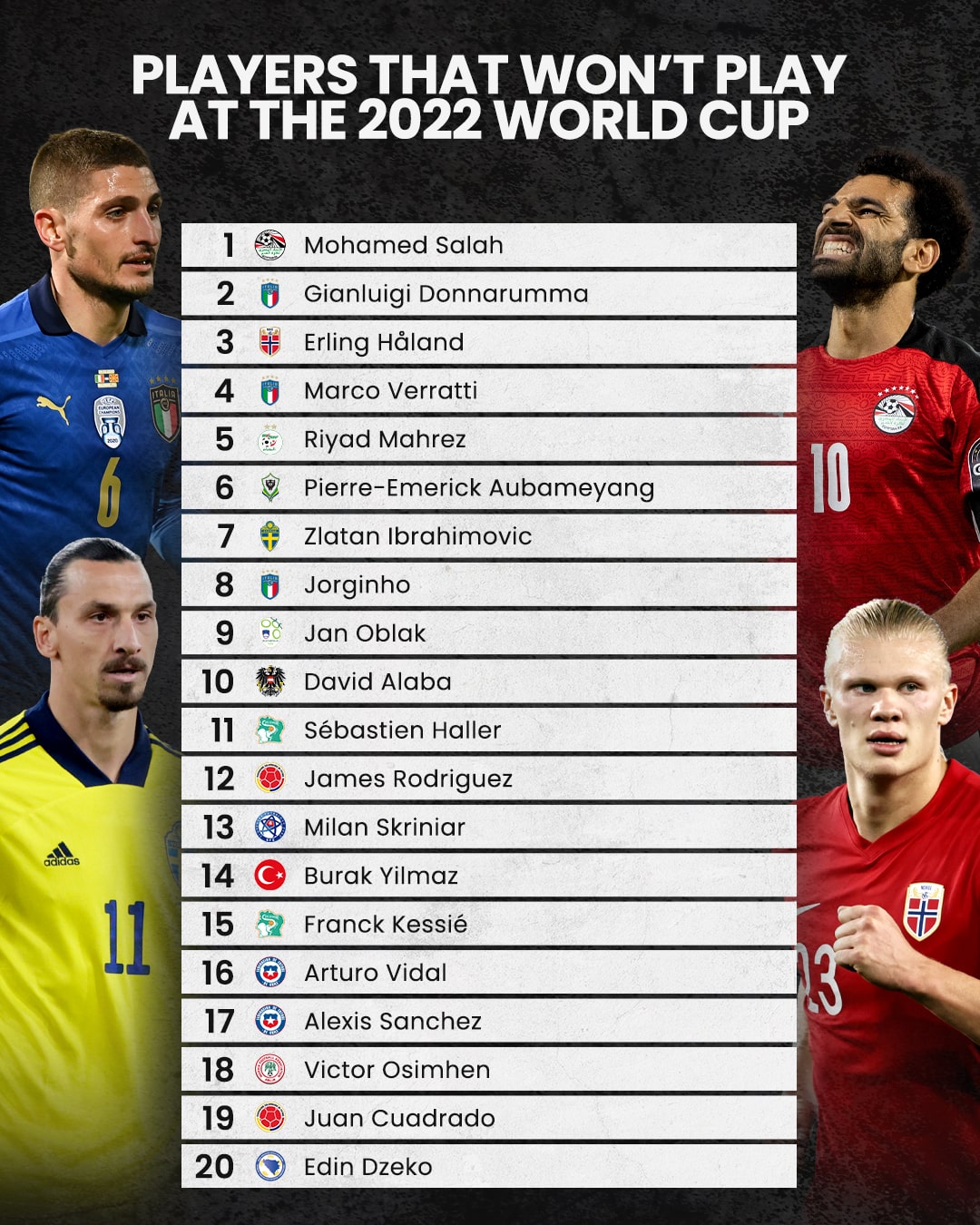 Qatar 202: The Best XI of Top Players Not Going to the World Cup

This is the list of the best players who will not be part of the biggest competition between Nationals that football can offer, which will officially start on November 21, 2022, at 11:00, with the inaugural match between Senegal and the Netherlands. Among the excluded, there are many Azzurri players, with Italy that is undoubtedly the great absentee of the competition together with other great players who have really touched the participation in the World Cup in Qatar.

Milan Skriniar, is unable to play for his country, which finished in third place in its qualifying group behind Russia and Croatia with 14 points, 8 fewer than Russia, that was consequently disqualified from the competition by FIFA. He is currently 27 years old and has not yet had the opportunity to compete in a World Cup. Unfortunately for him, he will not be eligible to compete in a World Cup until he is 31 years old in the year 2026.

The captain of his Austrian team, is one of the three defenders on this list of those who will not be participating in the World Cup. This is due to the fact that Austria’s World Cup Playoff match was lost to Wales by a score of 2-1 at the Cardiff City Stadium, with both goals scored by Gareth Bale. As a result, David Alaba will have to postpone his appointment at the World Cup until four years from now, during which time he will attempt to compete in a competition that he has not had the opportunity to compete in at this point in his career, and he is 29 years old.

As stated by the Italian defender, who retired after the match played in June between Italy and Argentina, the World Cup in Qatar would have been the last major stage for him with the Italian national team. Given that, over the course of his career, at the age of 37, he was only able to compete in the competition twice—once in 2010 in South Africa and once in 2014 in Brazil—not being able to participate in these World Cups is likely to have been a source of significant disappointment for him.

Hakan Calhanoglu, will not take part in the most beautiful and spectacular competition that football has to offer as a result of Turkey’s loss in the Playoff Semifinal against Portugal, a match that was lost 3-1. For Calhanoglu, it could have been the first World Cup for his country.

Another great player who will be missing from the World Cup in Qatar is, of course, Marco Verratti. One of the most powerful and technically proficient midfielders in the world, who, due to the fact that he has only participated in a World Cup once, in Brazil in 2014, where he made two appearances, will have to postpone the appointment for the World Cup in 2026, when he will be 33 years old.

Another player from the Italian national team that is featured in this Top 11 is Chelsea midfielder Jorginho. Jorginho was an integral part of Mancini’s midfield and was responsible for many stunning plays, assists, and goals that led to the victory of the Azzurri at the European Championships. Even for Jorginho, who is now 30 years old, it would have been the first time in his career that he competed in a World Cup.

He with his Ivory Coast team, of which he is the leader of the midfield, was unable to find a place at the World Cup in Qatar, given the second place in the qualifying group, behind Cameroon with a gap of 2 points, which did not allow him to qualify for the competition, not even through the playoffs, since only the first placed team would have won a place in the subsequent qualifying stages. The Ivorian midfielder, Kessie, is 25 years old, has not yet participated in the World Football Championships.

Erling Haaland takes one of the three places in this top 11 dedicated to the strikers who will not be present at the World Cup in Qatar. He will not be participating in the World Cup because Norway finished in third place in the qualifying round, behind Turkey and the Netherlands. Despite his young age (he is only 21 years old), he is considered one of the best strikers in the world.

Victor Osimhen, will not be participating in the World Cup in Qatar. He was unable to find victory in the double match of the playoff final played against Ghana, drawing on both occasions in the home and away matches. Ghana, who in the return match, drawn 1-1, managed to move on to the next phase thanks to the goal rule away from home, which is worth double.

Our Top 11 concludes with one of the greatest strikers currently active, but he and his Egypt team were unable to qualify for the World Cup in Qatar. They were defeated on penalties by Senegal in the double playoff match that saw his teammates national team, the Manè team, triumph and reach the competition.