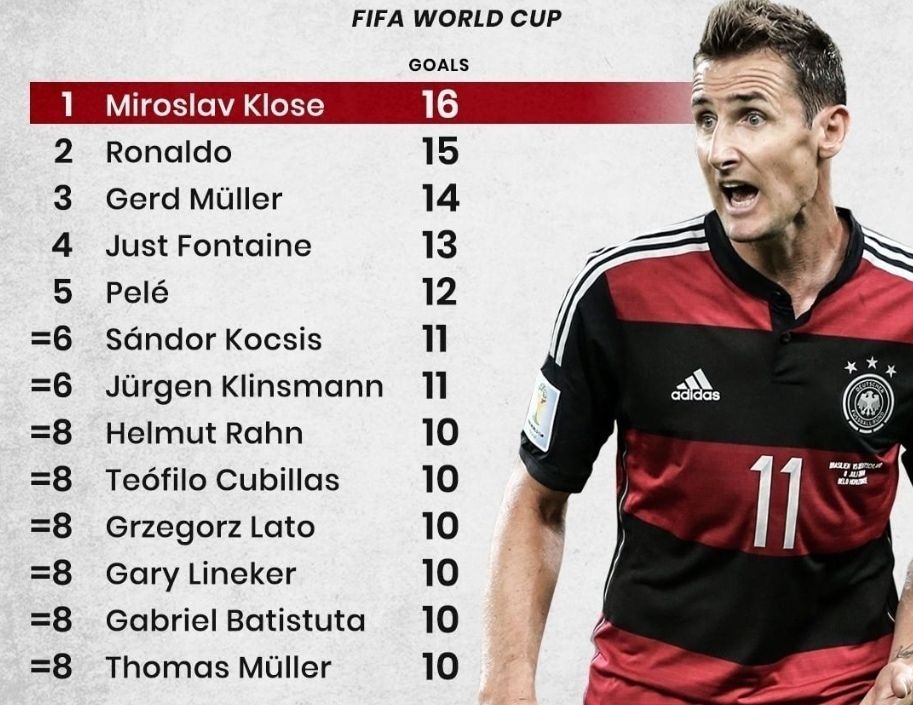 Even though there are still a few months left until the World Cup, Qatar is getting ready to join the long list of countries that have previously hosted the World Cup. The biggest tournament in football will take place in the winter of 2022. This will be the 22nd edition of the tournament.

The 32 finalists are getting ready to launch campaigns in which they will try to etch their collective names into the annals of history. This has started to generate a lot of excitement all over the world.

Let’s have a look at the history of the World Cup and some of the players who hold records in different categories now that the groups have been set and the tournament is only seven months away.

The order of the ten players who have scored the most goals in World Cup history since the tournament began:

We find an interesting group of eight players tied for tenth place; two of them are still active and have already qualified for the rounds of the Qatar 2022 World Cup. These are the men of record, Cristiano Ronaldo and Luis Suarez, who, among other things, also happened to be in the same group. With this statistic, the competition is going to be even more interesting because of how it compares to their previous accomplishments. In comparison to the Portuguese, who scored seven goals over the course of 17 games, the Uruguayans did so in just 13 outings. Hans Schafer (15 appearances for Germany), Johnny Rep (13 appearances for the Netherlands), Andrzej Szarmach (Poland, 13 appearances), Careca (Brazil, 9 appearances), Lajos Tichy (Hungary, 8 appearances), and Oldrich Nejedly (Czech Republic, 6 appearances) round out the top ten.

The sixth position is the only one left that has more than one player occupying it, and it is reserved for those players who have managed to score 11 goals in their World Cup careers. There are two of them, and neither of them are active any longer. Jurgen Klinsmann (Germany, 17 appearances) and Sandor Kocsis (Hungary, 5 appearances) are in this list.

We have now moved into the top five. From this point forward, there will be only one player occupying each position. He is one of the sport’s most iconic figures and a true legend in the game of football around the world: Pele. Only fourteen games were played during the World Cup, but twelve center goals were involved—an average of 0.86 goals per game.

It is the Frenchman, Just Fontaine, who comes in at number four, and he is a player who is not as well-known as the others who are present in the ranking. In his entire career, he has only competed in one World Cup, which took place in 1958, but he has left an indelible mark. He has scored 13 goals in just six games, giving him an average of 2.17 goals per game. This is a higher average than any other player who has ever played and scored in a World Cup.

Gerd Muller, a legendary figure in both German and European football, is on the third step of the podium, despite the fact that his average goal is low. Two World Cup victories, thirteen appearances, fourteen goals, and a goal-scoring average of 1.08 per game.

The Brazilian, Ronaldo Luis Nazario de Lima, takes the number two spot on this list of legendary football players from around the world. The 15 goals that he scored during a World Cup were over the course of 19 appearances that were spread out over four different editions. On average, 0.79 goals are scored per match.

The title of the best scorer in the history of the World Cup goes to the German player Miroslav Klose. There are 16 goals that he has scored during his career at the World Cup. These goals have come in a total of 24 matches and have been distributed across four different editions, an average of 0.67 goals per game.